Before I launch into the update, just to let you all know that the Garden Page, called “Gardening Matters”, has now been set up so that you can see what this bit is all about (with a few pictures for those tired of reading).

The last time I went up to the plot it was the end of May and things had just started to grow. So  I am expecting to see the effects of a further surge over the last two weeks when  I head up tomorrow. Be interesting to see whether this has been the case and to see which efforts lie in the morgue of the compost heap and which are just laid up in infirmary. Below is how things looked at the end of May 2013. 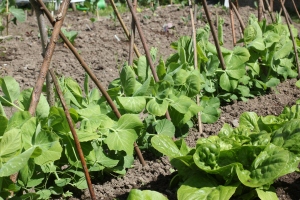 Two weeks ago the broad beans were flowering while the first of the beans could be spotted at about 5cm, but as thin as a shoelace. The peas were also looking green and ready to climb as they threw out there whispish tentacles to latch on to something to provide the support to climb higher. The main artichoke (of the globe variety) has been transplanted to a big tub, while a whole rake of brassicas have been transplanted into the brassica bed.  It really is all go and the fortunes of the blackcurrant bushes are looking good as small green globes are hanging aplenty in their bunches. So there we were a month ago moaning about how slow everything has been this year and now it looks to have truly taken off.

And now for the not so good! The cucumber and courgette leaves have gone white as if seared from the sun we have suddenly been getting. Looking this up it appears that the young plants have been getting too much intense light – in Ireland? Well clarity seems to be that it is the level of UV light radiation that is the problem. They can hopefully recover to lead normal lives, before being attacked by gardening amateurs wielding knives to alleviate them of their fruit (apparently). In addition the carrot germination has not been so good, despite setting the seeds in individual settings filled with a soil and sand mixture to keep light. Maybe too dry?  Well here is a glimpse of the hospital ward:

The Shy and Retiring Carrots

So far we have been able to enjoy plentiful rhubarb, lettuce, a number of radishes, shallots and spinach, but best of all spears from the asparagus have been cut for consumption. Mmmmmmm. For the rest we have to keep our fingers crossed and talk encouragingly. Looking to bring good news next time. MM and The Sage

2 thoughts on “Veggie Update I”