The Temple Inn, also known as Longboats, sits on a minor crossroads on the Blackrock Road and one of the places we passed as we took in the sights of the area with a very different look – snow!

And the snow just kept on falling for all 3 of the hours that we walked around the local area. One thing I really appreciated was the lack of traffic and the absence of noise from it. Fantastic.

These are my two favourite shots looking up the Blackrock Road with Longboats on the left, its rich blue colour really standing out.

Another shot of the same scene taken seconds earlier underlines the mood of the day for many, as the freak weather gave rise to days off and new adventures in the snow.

The only cars visible in the picture are all on the side of the road and piled with snow. For most of the day the normally busy road became a pedestrian thoroughfare.

I tried experimenting with the above images and, in particular, considered them in black and white, but for me the two above are the ones I would choose. The other versions are shown below. 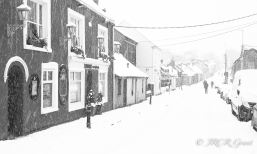 Hopefully you will agree with the choices I made. More images of this scene can be found on the facebook page of Longboats.

hoppy ales and beautiful places - make for heaven on earth