Well I have to put my hands up and admit I bought the above on vinyl before replacing it with one of those so called “compact” discs. Now Terence Trent D’Arby’s “The Hardline According to Terence Trent D’Arby”  is saved on a hard drive and simply called up.  My, don’t things change all so quickly.

There are, however, some things which are always as they were and so it seemed last Friday, heading in to the Everyman Theatre for part of Cork’s Culture Night. There were the larger than life panto characters of  Cinderella, Prince Charming and an Ugly Sister whose story telling and performances enraptured those children that were brought along to take advantage of the open doors. Songs were sung, dance routines performed, shouts rang out just as in days of yore.

As part of our backstage tour we ventured behind the magic curtain to the wings. The wall and stage door leading into the auditorium were covered in writing, where actors had left their mark or simply made a note of the production taking place. Cillian Murphy (of Batman, Intermission, Michael Collins fame) trod the boards here in the earlier stages of his career, but I could not see his scripture. The last person I saw here was Julian Lloyd Webber, but I too doubt that his name can be found etched behind the scenes.

Singing in the Rain 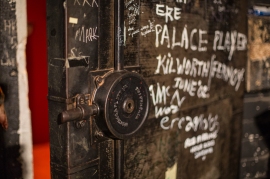 Door to the Auditorium II

Door to the Auditorium I 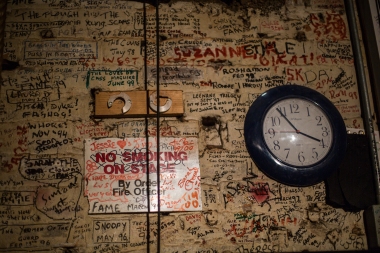 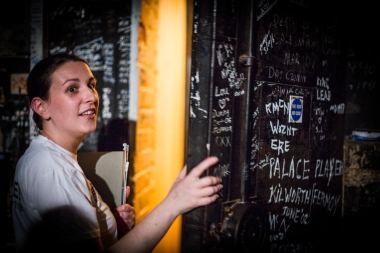 I found all of this fascinating, no doubt helped by the embellished narrative of Sean and Naomi as their stories captured our attention, just like the panto characters next door had held the attention of the children.

Have a great Friday and enjoy the weekend.