Benbulben is Ireland’s answer to Table Mountain and can be found just north of Sligo in the north west of Ireland. The area is synonymous with the renowned Irish poet William Butler Yates and his father, the artist, John Butler Yeats and is often referred to as “Yeats’ Country”.

W.B. Yeats was actually born in Dublin, but his parents hailed from the area and much of his childhood was spent here and in London (W.B. Yeats was much more than just a poet though – see Poet Org).

He died in France in 1939, but as a result of the outbreak of the second world war, his remains were not repatriated until 1948 (controversy as to whether these are his actual remains continues) . A simple grave marks the spot at Drumcliffe Churchyard, underneath the gaze of Benbulben.

At the westerly side entrance to the church, outside the graveyard gate lies a beautiful and fitting tribute to the poet, a sculptured completed in a very clever way. I refrained from taking an image of the sculpture as it the impact wouldn’t be the same . To see it you will just have to go there yourself, but here are the words used in the sculpture:

He Wishes for the Cloths of Heaven – WB Yeats

Had I the heavens’ embroidered cloths,
Enwrought with golden and silver light,
The blue and the dim and the dark cloths
Of night and light and the half-light,
I would spread the cloths under your feet:
But I, being poor, have only my dreams;
I have spread my dreams under your feet;
Tread softly because you tread on my dreams 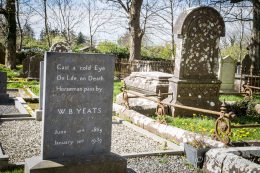 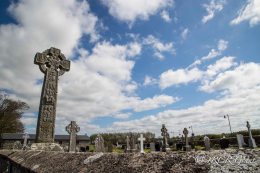 The area used to be the site of an ancient monastic settlement and on the edge of the graveyard is an ancient celtic cross, purportedly from the 10th century. As in over one thousand years old! Incredible.

Well that’s it for Sligo, from here we will head northwards.

31 thoughts on “Underneath the Gaze of Benbulben”